Goth rock has been my music of choice for the past few months for dealing with suffering and bullshit. I like its vibe.

And if you’re anything like me, I recommend putting on some Siouxsie or Bauhaus and strapping in.

I’ve been looking into playing card divination (a specific form of cartomancy related to tarot). I’ve got a specific deck, that has its own vibe for sure, and learning to read it has been a struggle. That’s kind of what you get when you have decks based on intellectual properties; the vibes get transferred over, and you have added associations based on your knowledge of the intellectual property. Much of this is besides the point.

At some point, John Beckett reviewed Camelia Elias’s Read Like the Devil: The Essential Course in Reading the Marseilles Tarot, the first in a trilogy which includes a book on playing cards and a book on Lenormand. As is my wont, I poked into the reviews for the book on playing cards, and found a zinger of a review. One star, by a fellow calling himself ABCDEFG. This lovely individual has a problem with Cameliaa Elias’s books, chiefly that those books are Wrong. With a capital W.

I’ve read several of ABCDEFG’s reviews on these and other tarot books, and the one on the recent Charmed reboot. That one, though, is blessedly short, and if you’ve got it in you, you may take a gander below.

It’s hard to parse their problems with tarot books but it appears to be that there is no appreciation for “number”, sometimes capitalized for no discernible reason. For example, in their review of the Essential Course in reading Playing Cards, they say this:

For traditional card readers, Number rules the world into which we were born. Number is not alterable. It cannot be made to bend to the wishes of mankind. I can tell you, precisely–even mathematically!–why 3 is “a little” or why 7 can represent either an obstacle or something magical/mystical. The same is true for the rest of the numbers. Elias does not give such instruction.

I also have a snazzy math/science background but I’ve always struggled with numerology, so I’m not one hundred percent sure I can fully grasp this and I feel like if I asked politely I would receive a dissertation in my email within a week explaining in the most condescending fashion possible how everything works and why I am wrong for not automatically knowing this.

Speaking of which, ABCDEFG appears to believe that not just anyone can read cards:

she is not herself in the lineage of the cunning folk or the Old Religion, no one has trained her in the art of foretelling, and no one has passed her the power.

This is in a passage describing how the system presented in Elias’s book is ripped from a website the reviewer used to run, where they hosted the system they learned “as a child” from their family.

I can’t find any indication for how long the reviewer’s family has allegedly been doing fortune telling, but they rely on their family history and long years of personal experience to tell everyone that Elias is Wrong. ABCDEFG is kind enough to provide example readings they have done for people in their lives, which they claim were completely accurate.

All of this is used to inform the reader of the review, in this case me, that Elias is Wrong. I don’t see much attempt at correcting misinformation, besides the occasional, condescending addition of things like this from their review on Elias’s Marseilles tarot book:

In cosmological reality, Swords are Air. The principle applies everywhere in manifested reality. Of the four building blocks of life, Air is Oxygen. The word comes from Greek “oxus” – “sharp” because Oxygen cuts away things and eliminates them. Wands aren’t sharp. Swords are. This is manifest even in your own body, where oxygen is used to get rid of waste. Oxygen combines with hydrogen, and you sweat it out. It combines with carbon, and you breathe it out. It combines with sulphur, and you poop it out. Oxygen = Air = Swords. Similar things can be said of the other Suits and Elements.

This emphasis on “reality” is also really grating, and crops up 11 times in the playing card book review and 4 in the tarot book review. The implication, I gather from all this harping on “reality” (let alone how triggering it is coming from the home life I have), is that Elias is not in line with reality, i.e. “delusional”. (In the hyperrational world us Pagans come into contact with, “delusional” = “disagrees with me”, despite having a proper psychiatric use and its misuse being actively damaging.)

Since ABCDEFG dipped into the well of their personal experience (twice), I suppose I have a right to do the same. I am in possession of the Night Vale Tarot, and really should catch up on the podcast but that’s besides the point. I haven’t been reading with it lately, but I have had experiences, years ago, where I did read with it and twice, something happened. Andred hijacked whatever a given card was “supposed” to mean and said, symbolically, “I am here, hang onto this”. So those two cards are on Her altar. It was unmistakable at the time it happened. Was I supposed to turn to Her and say, “Sorry, but the principles of Number say XYZ”? I have a feeling that wouldn’t have flown.

I have had milder versions of this experience with other decks. Sacred Circle Tarot is my go-to deck for big readings about the nature of the numinous in my life. There are differences between the Reno Day and Reno Night cards I own, in ways I can’t put into words. And the Doctor Who deck, mentioned above, has been giving me absolute fits trying to decipher. Knowing what numbers mean is only half the battle.

This rando on Amazon is way too much: witchsplaining, implication of an unbroken tradition untainted by [fill in the blank, really], on some moral crusade to “correct” “misinformation”, and a belief that a Charmed reboot with Latina actresses is racist white people because… reasons. Generally, they seem perpetually angry about things I can’t discern, and are taking it out on witchcraft and pagan content they disagree with.

(I suppose now it merits pondering the products they do like: Trials of the Moon, Magic Words and How to Use Them, Odisbook: The Book of Odr, The Compleat Witch or What to Do When Virtue Fails, Garnet Bracelet CHOOSE YOUR OWN CHARM, The Open Giza Fold-Up Cardboard Pyramid. I’m not opposed to the bracelet or the pyramid, Trials of the Moon or Magic Words (the last even sounds kind of interesting, as if I need more books). But Odisbook deserves plenty of second looks for dropping “odinist” and “a stronger relationship with the Gods of your people” in its blurb, that people are supposed to read, to decide if they want to buy the book! I guess all those 5 stars are self-selecting and I should avoid them and their opinions.)

I feel like I didn’t cover half of what I wanted to, even if I would be repeating myself. Perhaps I’m just overwhelmed by what I uncovered.

Every month this year, I have striven to do a tarot reading at the start of it, to peer ahead about three months and see what’s what, and what I might need to plan for or worry about. I did skip one on accident, but otherwise I have managed to keep consistent. The format of the reading is adapted from a divination I did at the start of the year, which was about what each month would hold. The cards representing each month were set aside, and three more cards pulled from a shuffled deck to elaborate and highlight things I might need to focus on.

Usually I keep these notes to myself, but this month’s reading (covering October, November, and December, rounding out the end of the year and reminding me that next month I will only be reading two months ahead) was unusually intense, energetically speaking. Cards elaborating on both October and November highlighted something I have been reading about increasingly in the past few years. The phenomenon is termed variously by Pagans as “The Otherworld Bleeding Through” or “Tower Time”, and is a combination of the general dramatic collapse of the American Empire and everything it “stands for” (those nebulous American/Traditional/Christian/Family Values), and an increase in the presence of Otherworldly beings of all stripes in the lives of us mere mortals.

Last year I was especially aware of the shift between a “solid” seeming “physical” world and a more “porous” one. I was not the only one; someone in a Discord server I am in also said they felt the world has become more “porous”. It began, for me, with a dog.

A couple of nights ago I had a rough nightmare involving a spirit I could not observe directly (the attempts shook fear into my soul the way only an immersive nightmare can) invading my home and needing to be forced out over a threshold of salt. I have details in my dream journal, but everything about the creature from its size to its nature to its obsession with the milk and eggs my dream self possessed (evidently), screamed, as I woke, “fairy”. I’m concerned it’s one of those rare warning dreams I sometimes receive; the last of those I had involved a figure in Egyptian cosmology that must routinely be fought against. It turned out that someone was going around in the community at that time asking about how to worship that specific entity, seemingly not understanding the fierce resistance they were met with on all sides.

Then, today, I did a reading (so that I do not forget for this month), and I found eight out of twelve cards screaming at me about spirits. October in particular stood out for having one card from each suit present. It became, to me, this grand something or other involving the Four Jacks to which Penczak introduced me. But one of the cards present also reminded me of the time I meditated on it, and found its environment forbidding, dangerous, even. I see it as a reminder that the spirit world is dangerous, that the fae are dangerous, and, as per the dream, I have no business getting in over my head with them.

November also showed something interesting: in one half, suggesting a short rest, but only that, from some problem I am facing in order to gain perspective. In the other half, I was reminded of a series of posts on this blog, about Gwyn ap Nudd (depicted in the Sacred Circle arcana card “The Underworld”, which is #14). He balances the world, and since humans have stepped out of line, he will balance it again. More details on the blog I linked. Nature is reasserting itself, spirits and Otherworldly beings are reasserting themselves, and there’s very little we can do about it. But, y’know, a good break to gain perspective never hurt anyone.

So I have been energetically drained by the experience, with the chief takeaway that the traditionally haunted time of year is about to be extra haunted. Mind the old rules, lock your doors. 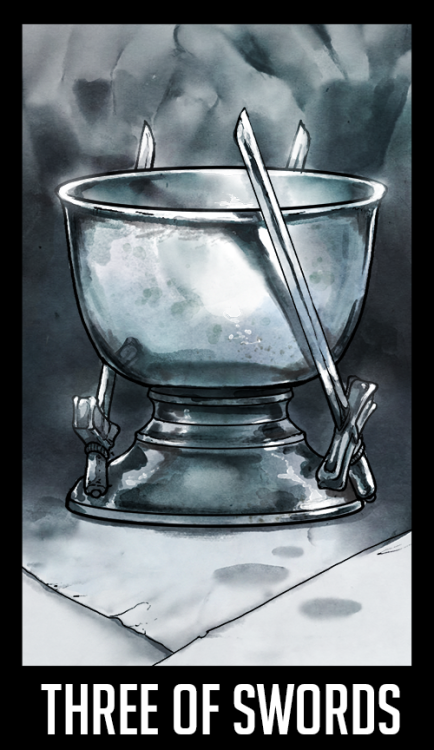 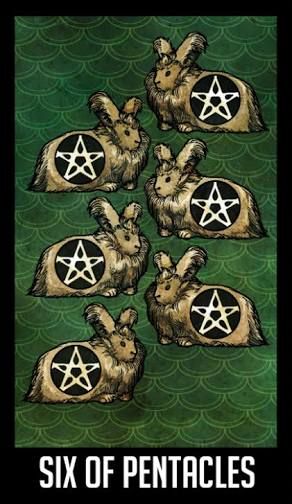 Specifically these designs, from the Night Vale tarot deck.